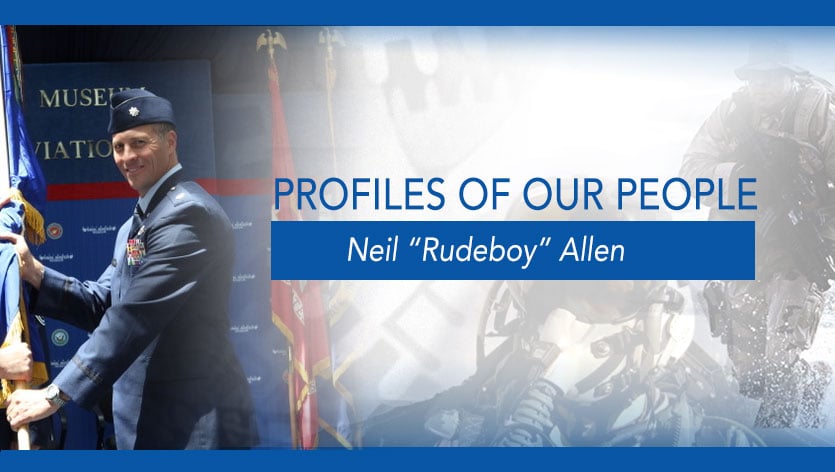 Check-6
No Comments
By Check-6

Neil “Rudeboy” Allen is Texas-born and bred, and yet his career in the Air Force has taken him all around the world. A native of Houston, Texas, “Rudeboy”  joined Check-6 after almost three decades of a distinguished career in the United States Air Force. He graduated from the University of Texas in 1989 and earned his officer commission from Officer Training School in 1990. During his career, he flew the F-15E Strike Eagle in test & evaluation, training, and combat, amassing more than 3,000 hours of total flying time. His combat deployments included Operation PROVIDE COMFORT in Iraq, Operation DENY FLIGHT in Bosnia, and Operation ENDURING FREEDOM in Afghanistan. Neil’s command tours included leading his F-15E squadron to Bagram Air Base, Afghanistan in 2008 in support of allied ground troops against the Taliban. He also commanded the 479th Flying Training Group, located at Naval Air Station Pensacola, Florida, where his group, comprised of more than 1000 people, was responsible for training Combat System Officers to meet operational needs of fourteen different types of USAF combat aircraft.

His leadership during his Air Force career was apparent early-on. “Rudeboy" served as a flight instructor at multiple levels, including the F-15E Formal Training Unit, United States Air Force Weapons School, and the Combat Systems Officer Flying Training Group.  He earned top instructor recognition from students, peers and superiors on more than a dozen different occasions, to include several Instructor of the Year awards.

Rudeboy has learned and taught the value of teamwork and doing the job right the first time—every time—through his years as a military officer, commander and tactical aviator. He is passionate about coaching and offering his experience in other dangerous, high tempo, unforgiving work environments.  Since joining the Check-6 team in 2017, Neil has worked in Chevron's Midcontinent Business Unit in West Texas in the Drilling & Completions division as well as Teichert Aggregates and Construction in Sacramento, California. He enjoys the challenge of adapting leadership and coaching techniques with a variety of clients in Check-6’s diverse portfolio.