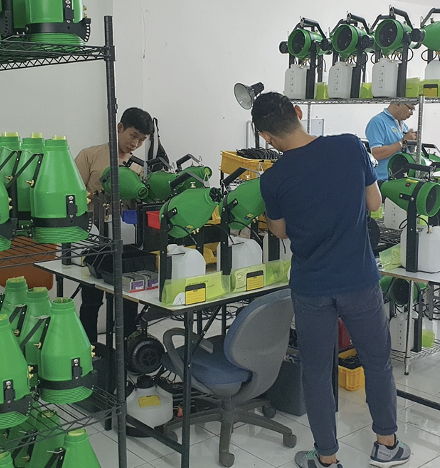 How Planned Based Execution Helped a Company Deliver the Impossible

had a big problem. His company, Core Team Technology based in Thailand, manufactures ULV Ionizing Sprayers, the kind that assist airlines and hotels with keeping surfaces COVID-19 free. He is also a Coach with Check-6, and his elite military background as an Army Green Beret helped him save his company from a global crisis, through Planned Based Execution Debriefing (PBED).

Here is his story.

COVID-19 Pandemic caused a dramatic increase in global demand of ULV Sprayers. My company, Core Team Technology, designed and manufactures the SprayFog ULV Sprayer, www.sprayfog.com. In a single month, we received six years-worth of orders, more than 5000 units. We needed to start delivering within a month and needed to clear the backlog within four months.

We had many hurdles to climb. We had severe floor space issues, cash flow problems, and supplier prob- lems as well but these were managed by me personally. While these issues were part of the planning process, they did not involve the rank and file team and subordi- nate management.

To quickly recruit and train a team to produce both volume and quality of production to meet this demand.

Recruiting during a pandemic. I needed people quickly, so I requested that my housekeeper start reporting to the office. Yes, I had to wash my own dishes. Her

18-year-old son had just graduated from high school, so I offered him work and asked him to invite any of his friends to come work as well, also recent grads. Since they had been in school together, there was low risk of

younger brother of a good friend who had just been released from a 4 ½ year stint in the Thai Federal Penitentiary. I called a good engineer I knew to come in as my production manager and that was the team. So my team was a good production manager, 15 recent high school grads, 15 Burmese workers, my housekeeper, and an

ex-convict. All but one Burmese could speak Thai—none of them could speak English—so the operational language was Thai with interpretation for the final Burmese guy.

Instill PBED, including Stop Work Authority, under pandemic conditions. We trained for one full day. Pandemic classes were also conducted at all brief/debriefs for weeks after. To start, we held briefing/de- brief twice a day, morning/lunch, after lunch/COB. This doubled our improvement cycles. My production manager and I would make jigs/fixtures during lunch and after work. All stores were closed so I had to buy most of what we needed—tools, shelves, and safety gear—from Lazada (an Asian-based site like Amazon). The first week was very difficult. On day three, we had to conduct a stand down as the quality team was getting upset due to the 50% rework we were seeing. We spent the rest of day three going over rejected items. We resumed operations the next morning.

I was offered a Thai Baht 500 award, equal to a day's pay, for ideas adopted into the process. This quickly got the attention of the team after I awarded the first few idea bounties. The goal of this was to get the team interested in finding better ways to operate and participate in the debrief. Initially, most of the young guys were quiet and were followers just waiting for instructions. The Burmese guys were labor and had never been asked to participate in planning. Seeing the opportunity to make some additional cash, most were coming up with something to try. A number of ideas had a serious impact on quality and throughout.

After the second week, we dropped to a daily brief/de- brief instead of two per day, as we were now past the introduction of the process and began to see results. The objective of the process was always kept within reason. The first objective was 50 units a day, then I promised a company dinner at 100/day. We later raised it to 150/day.

Improvement of Sub-task: As we are a small company, we do not own or have access to a forklift. We buy electric motors by the pallet/container load, so this poses a chal- lenge for the team. These pallets are one big box of 252 individual motors, each weighing about 1KG. This makes the pallets too heavy to safely lift without mechanical aid. To safely manage this delivery, we must break down the pallets inside the delivery truck and transfer the contents to smaller boxes for storage in our building.

We held pre-job meetings before and debriefed each shipment in order to improve. The major impact is that the task was so labor intensive that it required a large portion of the company headcount to complete. While this was going on, our normal assembly was disrupted. We received six shipments over a 60-day period. The last shipment was for eight pallets instead of four, and our breakdown and storage time was dramatically reduced.

Since this time, we have an all-time high of 288 units in one day. I have been able to reduce headcount by 25% and keep the ability to produce 150/day. To date, we have shipped more than 5,000 sprayers to: USA, UK, Italy, Brazil, Columbia, Mexico, Australia, Philippines, South Africa, Thailand, Malaysia, Dubai, and Saudi Arabia. Our sprayers are the only ones used in Mecca. We are under test now with a number of NGO's, hotels, airports, and shopping malls, and have signed an OEM agreement with a 200 Million Euro equipment company. We are developing a robotic sprayer with one of the largest Japanese robot- ics companies.

We were able to achieve all of this due to Planned Based Execution operations. We are living proof that it works!

Check-6 embeds elite military experience at all levels of our clients’ workforce to assist local leaders to transform their organization into a more productive, high-reliability organization. Our “coaches” train, coach, mentor, and develop leaders and teams at all levels of the organization to deliver and sustain increased operational safety and performance.