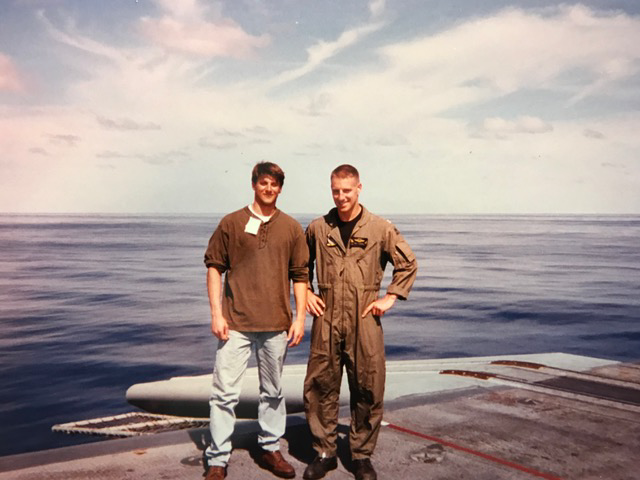 Check-6 is a team of highly-skilled veterans who have supported each other as brothers in arms during their service. We have a literal band of brothers now working in AMBU as well-respected Coaches for Check-6: Will “Mule” Mackin and his brother Jonathan “Ronin” Mackin. Will “Mule” Mackin is the older brother. He’s a Retired Naval Officer and specifically a Naval Flight Officer. He spent 6 years with DEVGRU (aka Seal Team 6) as their Aviation LNO, and has seen more than his fair share of combat time. He is also an author, and has a book that came out last year titled “Bring out the Dogs.” Mule remembers some lessons he has learned along the way.

"The best advice I ever received in the Navy was to “start out easy, then back off”. This advice came from Captain “Blood” Driscoll, who at the time was the Executive Assistant to the Vice Chief of Naval Operations. I was the Vice Chief’s newly assigned speechwriter, and Blood was giving me survival tips on my first day at the Pentagon. That advice has served me well ever since, and I use it often when coaching guys on the rig. Much like us, rig crews are A-type personalities who pride themselves on success. Often when they find themselves in unfamiliar territory their reaction is to try and get it over with as quickly as possible. I think Blood’s advice to me was to not fast forward through those unfamiliar challenges, but to slow down and figure out the best way through them.” Younger brother Jonathan “Ronin” Mackin Retired from the Coast Guard as an Officer, flying helicopters. He spent 10 years as a USMC officer, seeing a lot of time in combat, rescuing many injured Marines & Soldiers as he flew into high intensity combat zones. Afterward, he flew helos for the Coast Guard, rescuing people on the high seas. His experience has given him words of wisdom for his job as a Check-6 coach.

"It was President John F. Kennedy who said “Conformity is the jailer of freedom and the enemy of growth.”  From time to time, during my years in the military I would be reminded of these words when either myself or my squadron or anything for that matter seemed to plateau or stop evolving into something better.  To stop improving the way we or I did things.  I had a CO who used to call this situation a “Darwinian Cul-De-Sac”, something with stalled evolution and  impossible to break free from unless deliberate steps were taken to alter your course.  One of the weakest arguments a person can use as reasoning for doing something in a certain manner is to say something like “that’s how we’ve always done it”.  I’ve thought this exact phrase myself more often than I’d like to admit, and I’m often reminded of what a barrier to success it can be at times.  Just like anywhere else, the crew of a drilling rig will often fall victim to this Darwinian Cul-de sac and are, at times, reluctant to change regardless of reason.  It’s always fun to apply a small nudge and watch it slightly alter the momentum of this collective circular thought.  To watch a crew evolve past what they’ve always done and achieve something better.”